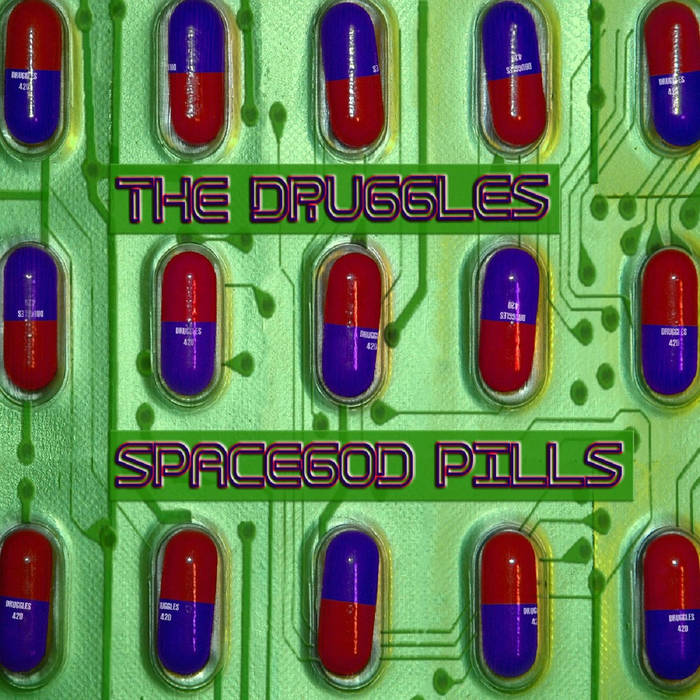 John Mentzer This album is full of tunes which just grab you and won't let go! Sky Father and Forkhead get stuck in my brain constantly.

If you lived in San Francisco in the early- to mid-aughts, and don’t remember The Druggles, then you were not part of the underground garage-prog, conspiro-rock scene. The Druggles ruled that scene with their particular insight into conspiracy theories and their definitive garage-prog style.

The Druggles began as a Beatles cover band, replacing the Beatles lyrics with their own lyrics about drugs and conspiracy theories. The Druggles name came from a discussion about Frankfurt School honcho Theo Adorno and Dr. John Coleman’s premise that Adorno actually composed all the Beatles tracks (even though he died before Sgt. Peppers, but that still credits him with Revolver, Rubber Soul, Beatles for Sale, Help! and a slew of amazing singles such as "I Feel Fine," "We Can Work it Out," "I'm Down" "Day Tripper" and his best evs hit: "Paperback Writer"). As Druggles lead singer Doug Welch was heard to declare during this discussion, “God, that guy was indeed the best songwriter outta the Frankfurt School, I mean have you ever heard Hannah Arendt's shitty singles, and Herbert Marcuse's foray into surf rock was completely forgettable, but otherwise he did some good writing while at Santa Barbara.”

Eventually The Druggles began writing their own music, narrowing the subjects of their songs to U.S wars for money and oil; the influence of fraternal organizations, political think-tanks, and intelligence networks on contemporary and historical events; economic totalitarianism; faked space explorations; and the worldview forced upon humans by government, media, and religion.

By the late aughts, after the Druggles had recorded the songs that would comprise Spacegod Pills, Welch claimed to be seeing Men in Black at Druggles shows. Soon he was not even showing up for rehearsals, afraid to leave his house, reporting that he had been abducted by government agents and warned not to sing Druggles songs anymore.

Fearing for his life, Welch left San Francisco (after the infamous “Walkout Show,” at which Welch, halfway through the show, jumped off the stage at the Make Out Room and fled the club yelling “They’re here, they’re here.”), and moved to Tucson, Arizona. Rumor had it that he lived in an aluminum foil-lined cave in Saguaro National Park, and according to an individual who lived in a neighboring cave at the time, "He was working on a homemade OVNI, whatever the hell that means!" Coincidentally, there was band playing in Tucson at this time called Otto and the OVNIs.

A year after moving to Tucson, Welch returned to San Francisco convincing The Druggles they had to record one last song, the track “Las Manos Invisibles,” written by Druggles guitarist Alec Way. The next day, early in the morning, Welch knocked on the door of Druggles bassist Brian Weaver and told him to lock the Spacegod Pills & “Las Manos Invisibles” masters in his safe. This is the last any member of The Druggles would see Welch. A mutual friend of Welch’s and Jason Yakich’s (lead guitarist of The Druggles) who lived in Tucson reported meeting with Welch at a bar and Welch told him he was headed to Mexico. No one has heard from Welch since.

The master tapes given to Weaver have their own story. After Welch stopped by Weaver’s home (known as Cubby Control, since it was, and still is, the headquarters for all things Cubby), Weaver threw the master tapes into a safe. A couple years later (not long after starting Cubby Control Records), wanting to release the album, he attempted to open the safe but could not remember the combination. After numerous attempts, Weaver gave up, hoping he would eventually remember the combo. Then last year, the combination came to him in a dream (a really strange dream, Weaver claims, which involved traveling to a planet called Progkp). After retrieving the master tapes, Weaver was then able to work with recording engineer Jai Young Kim (JYK) of Feast or Famine Records to prepare the album for release. (JYK was the original producer/recording engineer of the Spacegod Pills album.) Ironically, the combination to the safe was simply 6-6-6.

Weaver acknowledges that the lyrical content of the music may bring unwanted attention to Cubby Control Records, but he’s willing to take the risk. As he stated in an interview with Rolling Stone, “I have for a while been wanting to go to Mexico to look for Doug, so if anything happens, you’ll know where I am.”

Cubby Control Records is a record label located in San Francisco, CA. It is an offshoot of The Cubby, a collective of folks who have, since 1997, created all kinds of art in the name of The Cubby.

Bandcamp Daily  your guide to the world of Bandcamp

New sounds from Mavi, Ivy Sole & Moderator, plus AJ, the One joins the show, for her latest release